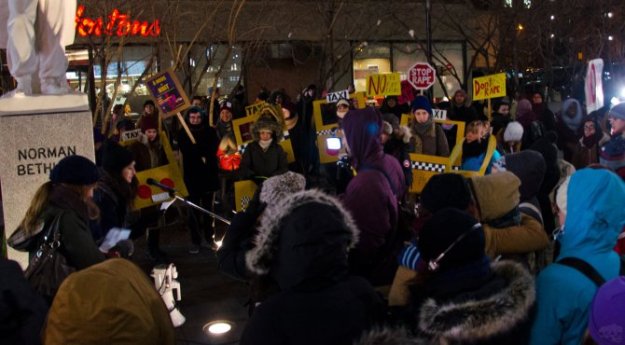 A few weeks ago, I had the honour of speaking at the 2014 Take Back the Night March in Montreal. I’d like to share my words here, for those who weren’t able to make it, those who live far away, or those who like to read. (Photo: ACAB Media)

Thank you to the Centre for Gender Advocacy for organizing this evening and for inviting me. These cardboard taxis look amazing!

We all have a million stories of feeling unsafe in the streets, and stories of ourselves and our loved ones experiencing violence.

I’m going to share a story about street harassment with you tonight. A story of two depanneurs. I had just finished swimming. I was hungry and didn’t have anything to eat at home. I went to the dep, picked out some tins of tomato paste, brought them to the counter, leaned on the counter because my leg was tired, and then felt an unwanted hand cupping my left bum cheek. I turned around, not believing what was making itself known on my butt, and yelled, you’re harassing me! I looked at the dep employee, said, this guy just touched my ass, turned around and looked at the grabber, exclaimed my anger, and then he said, no I didn’t, and dismissed me like I was a hysterical woman. The dep employee who I had been buying snacks and cheap wine from for the past 3 years, said nothing. I said, are you going to do anything? He did nothing.

I thought, if I had been driving my scooter I would have rammed the son of a bitch, or if I had brought my cane I would have whoopsed him upside the head, but I had no mobility devices/ weapons with me.

In this scenario, counter to what you might think, I was more exposed because I did not have my mobility tools, those symbols of disability, with me.

And so I relied heavily on the man behind the desk to get my back.

The tale of the second depanneur is as follows. I was practicing for a performance with a friend of mine downtown, and it was late. We got hungry and we got Chinese food. We practiced some more, and when we were finally satisfied with the state of our performance, or maybe just too tired to go on, we left. She took a cab, and this time I had my scooter. In Montreal, it is not possible to hail an accessible taxi. It is not possible to call for an accessible taxi either. These have to be reserved in advance and are highly unreliable even when you do reserve them, which I don’t do because I don’t plan to rehearse til’ 4:30 am. And I resent the implication that just because I have diverse mobility, I need to plan more, to make up for an inaccessible transit system.

Nonetheless, as we know very well, taxis are not a safe option for women travelling the streets of Montreal anyway.

The metro was not open at this hour, and even if it were, Guy-Concordia station is not one of the 4/65 stations in the city that are accessible.

So I was relegated to driving my scooter on the bike path.

As I was nearing my home, a man in a large blue pick up truck drove by, and slowed down at the corresponding rate that my fear grew. He rolled his window down in order to yell sexually explicit things at me. Things like, I’d let you ride me instead of that thing, and you’re too pretty to use a wheelchair, and where you going, anyway?

He was alone in his truck, so I knew he wasn’t just trying to be funny for friends he may have been with.

I was scared. I felt exposed.

This time, my mobility tool was a beacon, something shiny to attract the unwanted attention of a predator.

Something that made me seem more vulnerable and weak.

I went the other way at top speed and he got blocked by a one-way.He went around the block and I rolled to the dep on the corner, thinking, at least I can be around another person, in the light, and feel a bit safer.

I overestimated the power of presence of another human being.

The guy working in the dep barely took his eyes off whatever screen it was he was mesmerized by. He dismissed my claim of being followed with an ‘I don’t believe you’ smile and by saying about the truck riding predator, “he was probably just turning around.”

Tonight, I’m not going to focus solely on street harassment or harassment in deps, and the useless reactions of men working in depanneurs in the night when those are the only populated places open to seek refuge in when feeling threatened in the street.

Harassment is one form of gender and ableism- based violence that many people experience pretty much every day in Montreal, myself included. But it is not nearly the only form of violence and dehumanization that people with disabilities face.

I could give you numbers.

I could give you stats on the high numbers of people with disabilities (pwd) of all genders who are targeted and abused. I could tell you that pwd are vulnerable to many forms of violence, including violence in relationships, sexual assault, violence in institutional settings, forced sterilization and abortion, and non-consentual medical treatments.

I could give you stats like women with dis are 1 ½ times more likely to have been abused as a child.

I could tell you that sexual violence can also be the cause of disability.

I could tell you that 81% of women admitted to psychiatric institutions have had gender-based abuse in their past.

I could tell you that 5 times the number of deaf boys and 50% of deaf girls are sexually abused in Canada.

I could tell you that many pwd are excluded from romance and sexual expression because of barriers to access and prejudice. Many people with disabilities simply do not have sexual freedom.

I could share stories of homeless women with disabilities living out on the streets because of a lack of accessible shelters here in Montreal. I could share the experience of calling shelters with a woman who used a power wheelchair I met and hearing ‘we don’t serve those types of people here.’ Shelters do not have the resources or the understanding to serve disabled women at risk.

I could share stories of unfit living conditions where 20 year olds are living in retirement homes because there are no other assisted living options. And in these homes, abuse and control run rampant.

I could share the experiences of so many quebecers, silenced and forced to stay in abusive relationships, relying on their abusers for care.

These stories are real,

These numbers are far too frequent.

For me, Take Back the Night is about sharing this information.

And it is about so much more than that.

It is about more than individual experiences in a system that was not constructed with us in mind.

Take back the night is about taking back the humanity that has so often been stripped from us.

It’s about taking these stories, one by one, and creating a network.

A network of people looking out for each other.

Commit to tearing down those walls that keep people segregated in institutional living.

Commit to tearing down the doors behind which people stay in violent relationships, depending on their abusers for care.

Commit to breaking-down the already crumbling steps of Montreal’s infrastructure so that people can access what they need.

Commit to tearing down those walls!

Let’s not be too shy, or too scared, or too committed to the myth of self-reliance to ask how we can support one another.

It is that fear and discomfort and unfamiliarity that keeps those walls standing high, dividing us.

Let’s embrace our fear and discomfort and ask how we can support each other. And when we fuck up, because we will inevitably fuck up, let’s apologize, and keep learning how we can support one another. Because that, along with the actions of those here tonight, and those of us who cannot be here, will keep us taking back the night, tonight, the night after that, the night after that.

Say it with me:

Love laughing at work :)
Advance poll vibes
Honestly, so proud of my Unruly Writers Club community😍
What a great group of artists I got to talk with 💓💃
#gayagenda
#transmarch #marchetrans #transmarchmtl #pride
My Tweets